A revolutionary invention in the field of forensic science may be the answer to the backlog of rape kits in the United States. 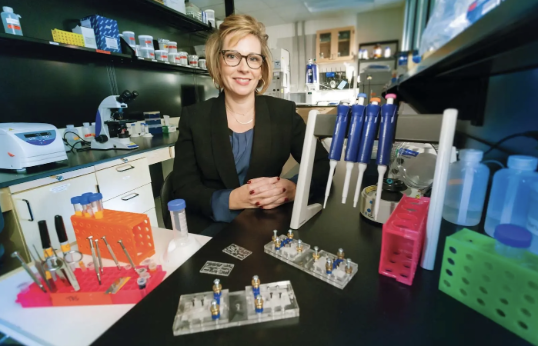 It is estimated that there are over 100,000 untested rape kits currently in the U.S. And some estimates even double that number.

The kit backlog has been an ongoing crisis for many years, but the number is growing bigger due to new legislation in many states that requires every kit to be tested, not only those that pertain to active investigations.

Now that legislation is making strides in helping prosecute sexual assault cases, the science of testing rape kits needs to come up to speed as well. Luckily, Tracey Dawson Green, Ph.D. professor and chair of the VCU Department of Forensic Science in the College of Humanities and Sciences, has invented a revolutionary device that can do just that.

Dr. Dawson Green (formerly Cruz) worked in collaboration with James P. Landers, Ph.D., at the University of Virginia to develop an automated device that reduces the overall rape kit processing time from up to 6.5 hours down to 90 minutes. It also reduces forensic examiners’ hands-on time from 2.5 to 3.5 hours to just 10 minutes, and allows for multiple kits to be tested simultaneously. The effect that Dr. Dawson Green’s device could have on reducing the kit backlog is unprecedented in modern forensic technology.

“Depending on the jurisdiction, 60 to 80 percent of the total casework in the forensic DNA community is from testing rape kits,” says Dr. Green. “That’s a huge amount, and our device can drastically reduce the time it takes to run those samples.”

Her invention is a closed, plastic, multilayer device that can run tests based on just a portion of a cotton swab from a kit, while also separating out the different types of samples in the kit. It’s a crucial aspect to differentiate cells from the perpetrator from that of the victim. The majority of the testing process is hands-free as well, which cuts back on the active time the analyst needs to spend on each test.

During the process of developing the plastic microchip (research that has been underway since 2011), Dr. Green has also made major advancements on the chemistry involved, which has improved reaction times and the device’s ability to separate types of cells. And while you might think the new device comes at an increased price point when compared to conventional technology, but the invention is a fraction of the cost. Traditional lab technology hovers around $12,000, while Dr. Green’s device sits closer to $1,500.

And the relevance of this device may potentially stretch beyond testing sexual assault kits: “We're separating cells using chemistry that targets cell surface proteins, so where there are several specific cell surface proteins that one would want to target, we have the ability to switch out the reagent with a different protein,” she said. “This hugely expands the applicability of the device, and the potential to apply this technology to all kinds of different settings, including diagnostic settings, is incredibly exciting.”