The VCU Commercialization Fund is providing a crucial boost to efforts by a VCU pathology professor to create a new treatment to fight an aggressive form of breast cancer. 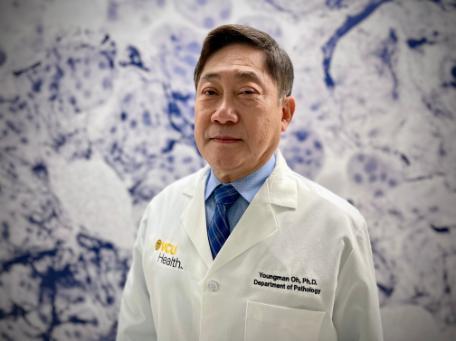 The fund recently awarded $50,000 to Youngman Oh, Ph.D. so he can pursue the research needed to validate that the monoclonal antibody drug he is developing is a viable treatment for fighting triple-negative breast cancer in humans.

“Without the Commercialization Fund award, we can’t push the button to move on to the next level,” Dr. Oh, director of VCU’s Cancer and Metabolic Disorder Lab, said of the fund’s December award. “That’s why it’s really important.”

If the investigational biologic that Dr. Oh is developing secures FDA approvals, the new antibody treatment would greatly add to a doctor’s arsenal to fight the disease. Triple-negative breast cancer is an invasive cancer that generally spreads more quickly and has fewer treatment options and worse outcomes, says the American Cancer Society. That cancer can also develop resistance to current treatments.

“There are only a few drugs that are specifically targeting triple-negative breast cancer,” Dr. Oh says. “This will really change the treatment options for those patients.”

The invasive disease, currently treated through chemotherapy and surgery, accounts for 10 to 15 percent of all breast cancers. Black women are twice as likely as white women to be diagnosed with triple-negative breast cancer and have lower survival rates at every stage of diagnosis, adds breastcancer.org.

“We wanted to focus on a disease that urgently needs the new treatment,” Dr. Oh says of creating a targeted therapy for triple-negative breast cancer. “This drug, after development, could also be used for lung cancer and colon cancer.”

Decades of research into the human growth process put Dr. Oh on the path to creating the new antibody therapy. He and other researchers discovered that IGFBP-3, a protein that’s believed to transport and preserve insulin-like growth factors (IGFs) in the body, can also kill cancerous tumors by binding with a cognate receptor on a cancer cell’s surface.

Using that knowledge, Dr. Oh developed the antibody therapy so that it mimics that protein’s cancer-fighting properties by specifically targeting and locking onto a cancer cell’s receptor.

“Our drug has a dual function,” Dr. Oh says. “It’s not only to suppress the primary tumor growth but also to prevent the cancer’s spread to the lungs and other parts of the body.”

Tests of the antibody treatment’s impact on tumors in mice have shown promising results in killing the cancer and stopping the spread of malignant tissue, Dr. Oh says.

But the new antibody treatment still must undergo years of further research and reviews by the Food and Drug Administration before it could be used in humans.

What’s needed now is the development of humanized antibodies and more testing to validate that the treatment kills cancer cells by binding with the cancer cell receptors. If the antibody treatment proceeds to clinical trials, that could unlock the investment needed by pharmaceutical companies to make the drug available to patients.

"We are actively seeking an industry partner to further develop this antibody treatment and to bring it to market,” says Magdalena K. Morgan, Ph.D., Director of Licensing at VCU Innovation Gateway. “We have several patent applications filed all over the world that provide broad coverage and protection for the technology, and we hope it will attract the right partner who is ready to invest in this potential new and promising treatment.”

Dr. Oh’s research has received about $4 million in funding from the National Institutes of Health, the U.S. Department of Defense, the American Cancer Society, the VCU Massey Cancer Center, and other sources. In addition to the December Commercialization Fund award, Dr. Oh also received a $50,000 award from the fund in 2016.

The latest Commercialization Fund award is helping to conduct the research that’s needed to keep up the momentum towards the drug’s creation, Dr. Oh says.

“It’s a very critical time to get this funding,” Dr. Oh says. “It really helps.”