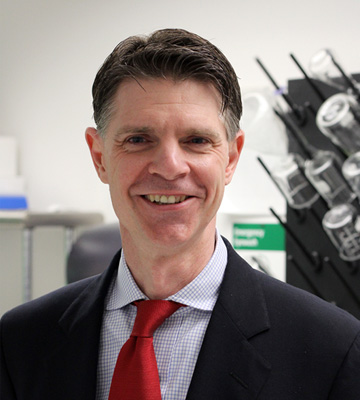 Dr. Jason Reed, Professor and Eminent Scholar in the VCU College of Humanities and Science’s Department of Physics, developed the technology behind Evizia, which centers on providing genomic diagnostic results for certain rare diseases. Reed is an expert in nanotechnology and related approaches applied to biology and medicine. He has more than two decades of experience in various aspects of single-molecule imaging and is an inventor on 14 U.S. and international patents.

Perfusion Medical, led by CEO Gerard Eldering, is backed by a research team at the VCU School of Medicine that includes Dr. Martin Mangino and Dr. Loren Librecht. The company is creating a technology that could stop many of the 1.9 million deaths worldwide every year from hemorrhagic shock. Their IP centers around PEG-20k (Poly Ethylene Glycol). When PEG-20k is administered intravenously after a patient has suffered a substantial blood loss, it prevents the all-too-common “reflow problem” when cells swell with water and prevent blood transfusions from doing their job.

Evizia received a $74,928 award for its resarch, titled Demonstrate the Precyse Platform's Ability to Provide Genomic Diagnostic Results for Certain Rare Genetic Diseases. Perfusion received $74,877. The total funding round to 15 Virginia companies by VIPC was more than $950,000.

VIPC’s Commonwealth Commercialization Fund seeks technologies with a high potential for economic development and job creation that will continue to position Virginia as a national leader in science- and technology-based research, development, and commercialization The awards round marks the first under the Fund’s private sector program, relaunched in January 2022. The program provides grants up to $75,000. Each award is matched by the company at a one-to-one minimum.

The Commonwealth Commercialization Fund “is Virginia’s premiere vehicle for putting dollars where many small businesses need it most: early-stage development,” says Caren Merrick, Virginia’s Secretary of Commerce and Trade. “The Commonwealth is a unique place for startups to thrive because, unlike many states, we have support mechanisms in place that accommodate funding customer discovery, technology development, pilot programs for proof-of-concept testing, and more. We want to help Virginia companies grow and lead the nation in innovation, opportunity, and job creation.”