There is a great demand for on-chip antennas that can communicate between the electronics on a chip and the outside world via electromagnetic (EM) or acoustic waves. Unfortunately, most antennas need physical dimensions that are comparable to the wavelength of the EM or acoustic wave. Because of this, only sub-wavelength antennas can be put on a chip. Acoustic antennas radiate acoustic waves unlike EM antennas, which radiate EM waves. Acoustic antennas are less preferable than EM antennas since acoustic waves need a solid medium to propagate through and the speed of the signal propagation is about five orders of magnitude slower than EM signal propagation. However, the advantage of acoustic antennas is that the wavelength of acoustic waves at 100 MHz is only about 30 µm, which allows it to be integrated on a chip. Modern communication systems will benefit immensely if antenna dimensions can be reduced to small fractions of the emitting wavelength.

An inventor at Virginia Commonwealth University has developed an on-chip sub-wavelength “acoustic antenna” composed of magnetostrictive nanomagnets deposited on a piezoelectric substrate and placed in contact with a platinum nanostrip. Passage of alternating current through the nanostrip exerts alternating spin-orbit torque on the nanomagnets and periodically flips their magnetizations. During the flipping, the nanomagnets expand and contract, thereby setting up alternating tensile and compressive strain in the piezoelectric substrate underneath. This leads to the generation of a surface acoustic wave (SAW). 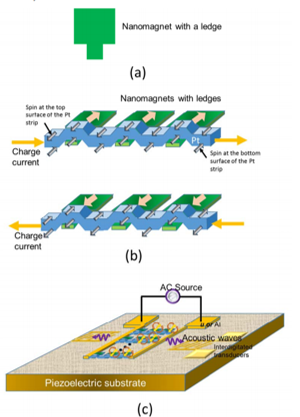 Figure 1. (a) Top view of a nanomagnet with a ledge. (b) Principle of actuation of the antenna by the spin orbit torque in the heavy metal (Pt) nanostrip. For one polarity of the injected charge current, the nanomagnets are magnetized in one direction and for the opposite polarity, they are magnetized in the opposite direction. (c) The nanomagnets expand or contract as they transition between the two orientations and that generates a surface acoustic wave in the piezoelectric substrate which can be detected by interdigitated transducers delineated on the substrate.