A surgical solution for midfoot arthrodesis

Midfoot arthrodesis, which involves the fusion of bones in the medial column, is a common treatment for a number of foot deformities and conditions. This procedure is typically performed with the implementation of a lag screw which engages one bone with its threaded portion and a neighboring bone with the smooth portion of the screw shaft. In combination with the head of the screw, the bone and neighboring bone are then compressed together. Due to the current design of these screws, many do not allow for the fusion of more than two bones, thus requiring several screws to be used for the fusion of three or more bones in the midfoot. Furthermore, these screws may sometimes rotate or shift and loosen due to deleterious movement between the bones, thus inhibiting bone remodeling. VCU researchers have developed a device which utilizes the properties and abilities of a plate and screw to address these issues.

The developed device is a medial column (MECO) fixation system, meant to support the fusion of the transverse tarsal joint, the cuneonavicular joint, and the tarsometatarsal joint. This is achieved via a cannulated lag screw that crosses the aforementioned joints and induces compressive forces required for fusion. The lag screw has through-holes in key locations to install through-screws, which provides for a higher level of fusion stability and ensures that the lag screw does not loosen over time. Additionally, a washer plate has been designed to be seated in the plantar surface of the first metatarsal in order to provide an even level of compression on the head of the metatarsal, while also increasing the degree of compression across all joints. A guide for the implementation of this system has been designed. 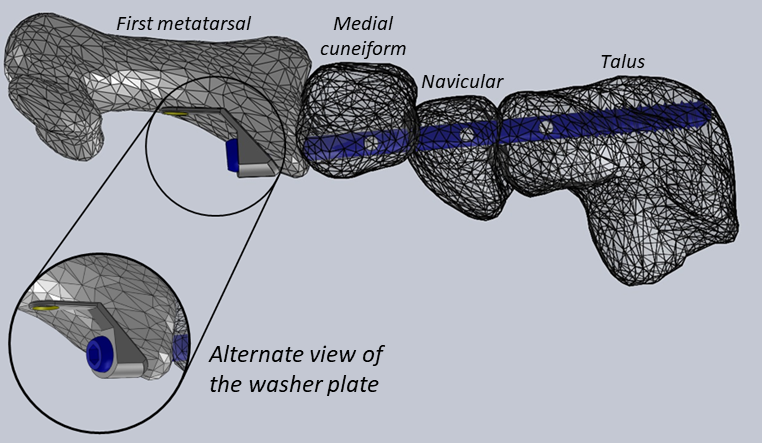