With an increasing standard of living and life expectancy, Alzheimer’s Disease has become more prevalent in the aging population of most developed countries. The onset of Alzheimer’s dementia is primarily attributed to the cleavage of the Amyloid Beta 42 (AB42), and the formation of neurotoxic fibrils associated with these proteins. The formation and aggregation of these beta amyloids are believed to specifically target neuron synapses and lead to cell death, causing severe cognitive dissonance and a reduced mental capacity. Current treatments for Alzheimer’s consist of cognitive-enhancing medication, self-care or occupational therapy but none of the aforementioned can cure or slow the progression of the disease.

This invention involves the use of natural compounds that have been shown in in-vitro studies to inhibit AB42 fibril and aggregate formation associated with Alzheimer’s disease. The compounds have the potential to cross the blood-brain barrier based on known receptor trafficking behaviors. The reduction of the formation of the AB42 fibril formation could reduce the neurotoxicity of the plaque buildup slowing the progression of the disease state.

In the figure below, AB42 aggregation on mica chips showed a dose dependent decrease with the addition of each natural inhibitor. Aggregate formation was determined by height based off of AFM measurements. 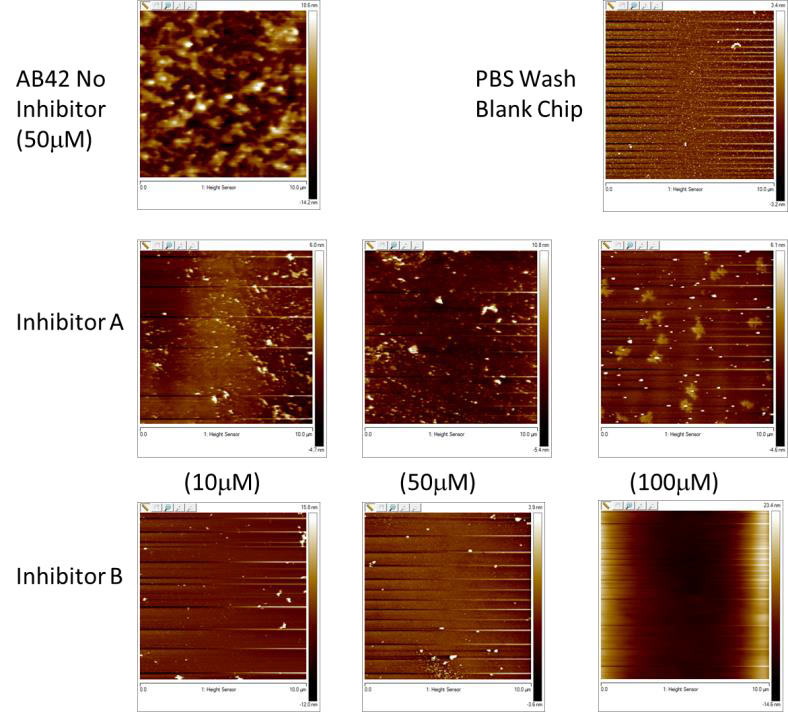