A novel diagnosis of Lyme Disease

Lyme Disease is the most common tick-borne disease in North America and Europe and is caused by the Borreliella family of bacteria. Current diagnostics that detect Lyme Disease need to be run multiple times to screen for the various antibodies that are upregulated during Lyme Disease infection. However, performing multiple tests decreases the specificity and sensitivity of current diagnostics and increases the cost associated with these tests. Recent research at Virginia Commonwealth University has developed new proteins that enables detection of numerous Lyme Disease antibodies in one single assay.

Researchers at Virginia Commonwealth University have developed novel chimeric recombinant proteins and protein panels that enable the detection of various antibodies commonly associated with Lyme Disease infection. The unique chimeric proteins are the first to be designed, tested, and demonstrate the ability for serological diagnosis of Lyme disease caused by the family of Lyme Disease spirochetes. By utilizing a single chimeric protein designed to detect multiple antibodies, the technology is able to achieve a significant increase in specificity when compared to current proteins (VIsE) which can be seen in the figure below. In addition to increased specificity and sensitivity, the recombinant protein is also able to distinguish between active infections and maternal antibodies. Moreover, the chimeric proteins are not affected by vaccinations, allowing them to be utilized in animals vaccinated against Lyme Disease as well. 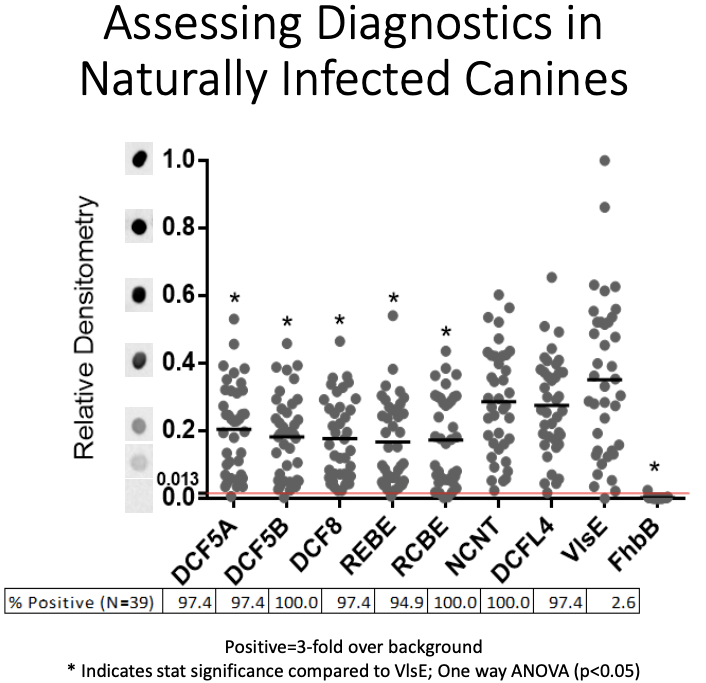