A Recipe for the Design of Penta-graphene

This roadmap utilizes topologically assembled precursors (TAP) that are prevented from accessing the ground state or other isomers through three steps: (1) A precursor molecule that resembles the atomic, structural, and local symmetry of the desired structure is selected that (2) is then made into different topological assemblies. This is achieved by confining the precursor units into constrained superlattices and controlling their overall orientation to induce connectivity between certain atomic nodes of adjacent units. (3) These topological assemblies are then relaxed using density functional theory to their nearest potential energy surface critical point. The use of this roadmap has been suggested for the synthesis of penta-graphene, composed only of carbon pentagons, via the precursor molecule 3,3-dimethyl-1-butene (C6H12). Theoretical calculation suggest that this carbon polymorph is dynamically and mechanically stable, temperature resistant up to 1000 K, has an ultrahigh ideal strength that outperforms graphene, and an intrinsic quasi-direct band gap as large as 3.25 eV. 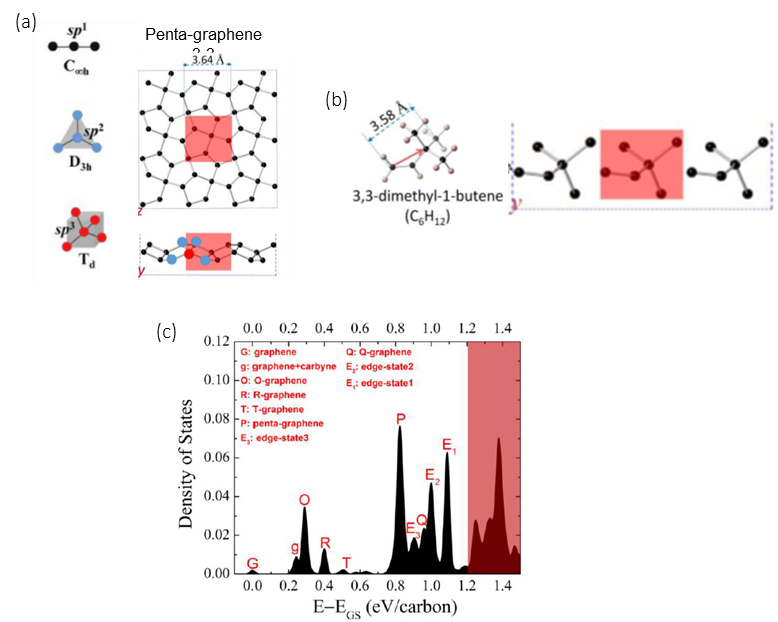 Figure 1. (a) sp1, sp2 and sp3 carbons and views of penta-graphene down the z and y axes. (b) Precursor molecule 3,3-dimethyl-1-butene and a lateral view (y) when aligned. (c) The relative probability of different structures vs. their energy above the ground state. Penta-graphene has a high realizablity while the realizability of graphene is suppressed based on peak height.