U-Carbon: A Conductive and Magnetic Carbon

Carbon, the building block of life on Earth, forms over ten million compounds and materials with a variety of properties, from the soft and black graphite to the hard and transparent diamond. However, carbon material acting like a ferromagnet or a metal with high electrical conductivity has been absent. Given the light weight and bio-friendly nature of carbon, such materials can bring numerous new developments and applications in science and technologies, meeting the demanding challenges in today's electronics, automotive, and medical sectors. Researchers at Virginia Commonwealth University working in collaboration with researchers at University of Massachusetts, Lowell have successfully discovered a mechanically stable carbon material that is metallic as well as ferromagnetic under ambient conditions.

The newly developed carbon, deemed U-carbon which can be seen in part A of the figure below, was synthesized using chemical vapor deposition with a particular molecular precursor. U-Carbon exhibits good mechanical strength and high reflectivity from far ultraviolet to mid infrared, visually having a mirror-like appearance with metallic shine. The U-Carbon crystalline structure, as demonstrated in part B of the figure, contains both three- and four-coordinated carbon atoms. The measured electrical conductivity of U-Carbon can reach 5 x 105 S/m which is twice that of the graphite in its basal plane and is comparable to that of stainless steel. Its measured magnetization is saturated near 2.2 emu/g with an ordering temperature above 400 K (125 °C) as shown in part C of the figure. The metallicity and magnetism of U-Carbon are due to the unsaturated electrons around the three-coordinated carbon atoms in the structure. In addition, its electrical conductivity can be enhanced via compression. 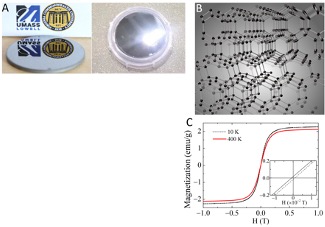 Figure: (A) Synthesized U-Carbon showing high reflectivity and mirror like appearance with metallic shine. (B) The metallic and ferromagnetic U-Carbon structure, characterized by three- and four-coordinated carbon atoms. (C) Measured magnetization hysteresis of U-Carbon. The inset shows the non-zero magnetization at zero field, a feature of ferromagnet.

The next graphene? Shiny and magnetic, new form of pure carbon dazzles with potential