In a modern space on Richmond’s Broad Street this week, a group of researchers from across several VCU disciplines showcased their cutting-edge work in virtual and extended reality applications.

Corralled by VCU Innovation Gateway, the diverse group of faculty and graduate students and trainees spanned VCUarts, the colleges of Engineering, Health Sciences and Humanities and Sciences and the schools of Medicine and Pharmacy. At the VCU da Vinci Center for Innovation‘s Shift Retail Lab, they showcased virtual reality games, teaching applications, methods of treating opioid use disorder and a tool to help paraplegics manage pain. Most of the teams collaborate with one another across disciplines to build their applications.

“I hope the collaborative spirit is going to drive more innovation, especially in the VR field,” P. Srirama Rao, Ph.D., VCU’s vice president of research and innovation, told a group of about 60 at the Virtual Reality and Extended Reality (VR/XR) Happy Hour. “We should take advantage of VCU’s unique position of having a top-ranked arts school, a health sciences campus and a brilliant engineering college, and bring them all together to drive innovation. And that will happen through collaboration, not only across VCU, but through public-private collaboration. Those relationships are going to be critical.”

VR/XR is one of the fastest growing fields for funding by the National Institutes of Health, with investment growing more than 480% in the last decade. VR-based startups are also outpacing almost all other new ventures when it comes to valuation and market growth. The VR/XR Happy Hour was held shortly after VCU was named no. 58 in public research universities nationwide by the National Science Foundation.

“Making sure VCU stays a top-ranked research institution is one reason I am so excited to see the rapid growth in virtual reality and extended reality projects across the university,” Rao said.

James “Jim” Thomas, Ph.D., a professor in the Department of Physical Therapy, heads up the Motor Control Lab at VCU. He and his team are developing a series of VR tools for those with mobility impairments. He said there are 72 faculty members working on VR projects that they know about, although both he and Rao said there were likely more.

“We are trying to build a network of VR/XR faculty at VCU and figure out who is doing what where, and really find people across these disciplines,” Thomas said. “Our goal is to turn VCU into a Virtual Reality Center of Excellence.”

Thomas encouraged anyone at VCU working on VR/XR projects to visit Ram Pages and join the Launching Excellence in Virtual Reality (LEVR) group. “We’re trying to find ways to use virtual reality, to not just improve the human condition with respect to medicine, but also to do what we do in the universities: educate people,” he said. “There’s some really, really clever work to be done.”

“I was able to get a closer look at a couple of interesting VR projects, specifically in the medical industry. Knowing some of those ideas are now part of clinical trials shows that the question is no longer if XR is a worthwhile investment,” he said. The goal now, he said, is how to scale up and ensure quality. “VR is primed to enter its grown-up phase, and that’s why we are paying more attention to it this year. VCU is putting deserved attention on this technology and supporting its professors and students in getting those ideas to the virtual world.” 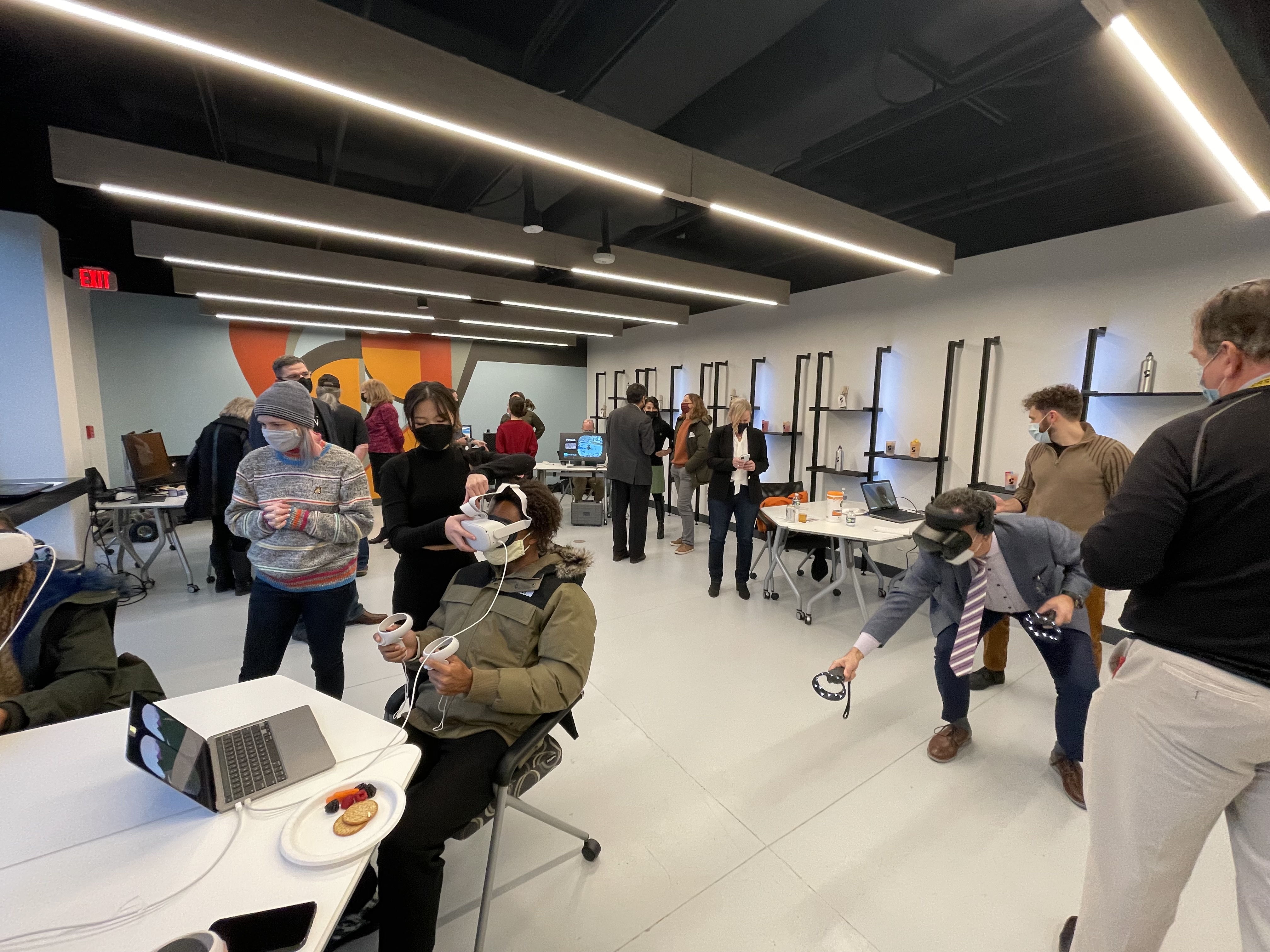 Among the presenters at the VR/XR Happy Hour:

James Thomas, Alexander Stamenkovic, and Forough Abtahi of the Motor Control Lab at VCU. The team is leading an ongoing Phase II randomized clinical trial funded by the NIH. The VIGOR study (Virtual Immersive Gaming to Optimize Recovery in LowBack Pain) examines the efficacy of their immersive gaming intervention to reduce kinesiophobia (fear of movement) and improve motion in participants with chronic low back pain. Since joining VCU in 2018, Dr. Thomas has been primarily focused on the development of novel VR assessment and treatment tools for a variety of orthopedic and neurologic impairments. His team has also created “games” for addressing trunk control in Parkinson’s disease as well as balance impairment following traumatic brain injury.

Nathaniel Kinsey, Ph.D., associate professor in VCU’s Department of Electrical and Computer Engineering, has focused on using immersive technologies to improve educational outcomes in STEM disciplines. He is working on a VR solution to improve student success in a math-heavy electromagnetics course. In partnership with SciVista, Inc., a small business with a focus on VR products, he developed a prototype virtual classroom suited for fully collaborative and immersive lectures, labs and recitation. The goal of restructuring this course is to take advantage of new VR visualization tools to demystify the invisible world of electric and magnetic fields and facilitate student success.

Semi Ryu, a professor of Kinetic Imaging at VCU Arts and an Associate Professor of Internal Medicine at the VCU School of Medicine, has explored VR artwork and the psychological relationship between physical and virtual bodies based on Korean healing rituals. Her work has been presented at international venues of screenings, exhibitions, performances and publications in 23 countries. Since 2014, she has worked on Art and Health projects using VR avatar and interactive technology.

Zina Trost, an associate professor in the Department of Physical Medicine and Rehabilitation, uses Virtual Reality (VR) interventions to target psychological adaptation, pain relief, and rehabilitation across a range of conditions including musculoskeletal pain, traumatic injury, and neurological impairment (e.g., stroke, cerebral palsy). The Trost Lab is using advances in VR and telehealth to facilitate home-based, clinician-monitored interventions as well as novel “virtual embodiment” capabilities in the service of rehabilitation. Dr. Trost is leading a Department of Defense-sponsored multisite clinical trial to examine a home-based virtual walking interface as treatment for neuropathic pain in spinal cord injury (VRWALK). Her work has received national and international research support, including NIH, DOD, foundation, and Small Business (SBIR) funding. See a video of her work here.

Mark Lambert, CEO of Conscio VR and Dr. Jarrod Reisweber, an assistant professor in the Department of Psychology, are developing a program for individuals in recovery from substance use disorder called Transcending Self Therapy (TST). Developed by Dr. Reisweber, the program has shown positive results in the early recovery phase for people with substance use disorders. A prototype game called The Retreat is part of a clinical trial with providers and has yielded overwhelmingly positive results. A trial is underway at the Central VA Health Care System and they hope to expand to other veterans hospitals in 2022.

Dayanjan S. “Shanaka” Wijesinghe, Ph.D., an associate professor in the VCU School of Pharmacy, showcased with is team an augmented reality application that allows physicians to visualize and study three-dimensional CT and NMR scans.

In addition, a team of VCUarts students showcased several games at the event.